I thought Todd Dixon looked like Billy Idol crossed with a pear---if Billy had a spiky mullet. He was a smiler, a drinker, and while he stood there skinny and shirtless in the dirty Texas lake talking about music, beer in hand, I thought we would hit it off. We were both huge Depeche Mode fans both had tickets to the upcoming Music for the Masses tour date at Reunion Arena."You're not going to believe this," he told me, and proceeded to explain that his high school sweetheart had left Texas, become a model, and was currently dating Martin Gore. All the more incredible was the fact that she had invited him and a small group of friends to a meet and greet the band the night before the big concert.

I told Todd how I'd just bought my first keyboard, a Roland sampling S-10, and how I was looking to join a band. He smiled excitedly and told me, "I play keyboards too."


"NO shit. And I'm looking to do the same exact thing. In fact, I'm already working with a guy."

Todd had another musician with him that day at the lake, a thin guy with Rockabilly sideburns and a scraggly tuft of hair on his chest and chin, a guy a bit older than us who I would later learn had a penchant for paisley shirts, black skinny jeans and pointy boots.  Like me, David Burdick was a transplant from Tulsa, Oklahoma.

Todd and I were talking and I learned we were looking to do the same kind of music, synth-based like Depeche Mode, but maybe more aggressive than European synth pop. Before long Todd had invited me to join his yet unnamed band---and invited me to be his guest at the private Depeche Mode party a few nights after.

Meet Depeche?  To say I was excited is an understatement, but a little voice inside my head also warned that I'd just met this guy at the lake, drinking with a group of high school kids from a private school, and that he might not be on the up and up.

But the phone rang the following day and it was Todd, confirming everything that had been said at the lake.

And true to his word, a few evenings later I met him at the fairgrounds where the party was to be held. I had no idea what to expect. I couldn't believe that I'd actually get to meet my musical heroes. In my imagination I played through the coming night: an elegant event, groups of record industry types standing around sipping wine, having polite conversations. For a moment a spotlight would come on, directing our attention to a balcony on which Depeche Mode would be standing, waving to the regular people below.

But instead, I was met in the parking lot by a group of excited kids, probably seven or eight of us in total, decked out in black and chains and giddy about what might happen next. Susanne (somehow I remember her name), Todd's high school sweetheart, approached us and told us to follow her.

We entered what appeared to be a biker bar, nearly empty. I don't think any of us were old enough to drink, but someone wheeled out a cart full of beer and ice and we were told to help ourselves. The room was rustic, furnished by wooden picnic tables. Todd and I sat down and chatted about our plans for the band while nervously waiting to see what would happen next.

In walked all four members of Depeche Mode and a manager. We were introduced and shook hands around the table before they popped open beers of their own and sat down.

Starstruck, the other kids (we were all in our late teens) and I acted like complete fan morons, giddy with the opportunity to be up close and personal with our teen idols.

So what happened next?

The next morning I woke up thinking "where am I" and "how did I get here?"

Apparently I'd had too much to drink and blacked out. Somehow I was back home at my parents house. My car was missing.


While nursing a Godzillian hangover, I racked my brain for memories from the previous night.  I had spotty memory blotches, a vague recollection of David Gahan brushing me off when I tried to start up a conversation, peeing next to Andrew Fletcher at the bathroom urinals, dancing to Blue Monday with Martin Gore and Todd in the corner of the little bar.

Todd was apparently cogent enough to document the evening, as someone snapped this photo of him  standing next to Dave Gahan.  That's Todd on the left. 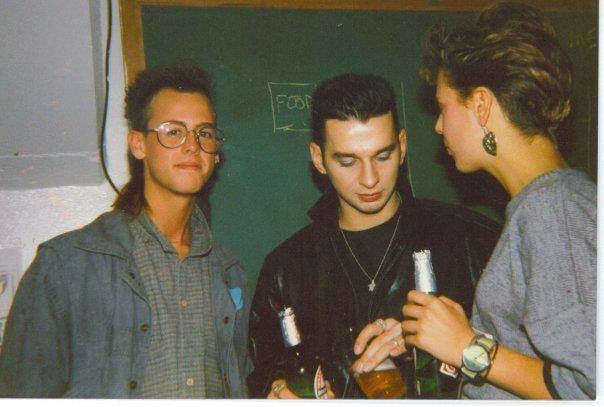 I was able to remember leaving the biker bar and going to Club Clearview in Deep Ellum as guests of Depeche Mode.  They gave us the VIP treatment and for a moment in time we felt, and probably were, absolutely cool.  The last thing I remember is asking Martin how old he was. He claimed to be 27. I asked him to sign my shirt.

Later, I washed that shirt and the signature came out.  So much for keepsakes.

I got together with Todd to make music the following week at his apartment off upper Greenville Ave, an area overbuilt with complexes to house minimum wage workers, young couples, and oversexed tanned twenty somethings trying to get lucky while hanging out by swimming pools. Todd's apartment was sparsely furnished and dark, lit only from light coming through cracks in the curtain. The place smelled of cigarettes.

I'd been saving money from my pizza delivery job, I told Todd, to buy a Roland MC-500, a stand-alone sequencer.  He showed me what he was currently using to sequence, a software-based solution called Voyetra running on a Commodore 64. He'd been working that day on a cover of Black Celebration.

I'd been working with my own keyboard for about six months already and had made a little music with a guy name David Jones. We'd called ourselves Blessings In Disguise and our act consisted of David, who knew nothing about music theory, playing feedback through a Marshall stack while I simultaneously banged out drum samples on on my keys. We'd played one gig, a high school party, a show that climaxed when David bit down on the blood tablets he'd bought at a costume store, producing spittle quite epic when spewed under our strobe lights.

Before that day, I didn't have the know-how to sequence sounds or music. Todd's arrangement of Black Celebration sounded great.  I would come to learn that Todd liked working on cover tunes.

This is what filled the only apartment bedroom: a mattress which was lying on the floor, a desk covered by a keyboard, a computer, a four-track recorder and several wires. We plugged in my keyboard and, using a microphone, took a few short digital recordings, known as samples, of ourselves breathing.  We assigned them to the lower half of my Roland S-10 keyboard.  It had only the capacity to store four samples and with a total sampling time of 4.4 seconds. Once we were happy with our new sounds they were added the to the mix. Todd and I took turns laying down vocal tracks on the four track recorder, with Todd taking lead and me taking backup.

"So tell me about this other guy you are making music with." I said.

I peeked around the corner and into the living room. There was a lump under a blanket on the couch.

"He's your roommate?" I asked. "He's asleep. It's two O'Clock in the afternoon."

"He doesn't get up until the sun goes down. Unless it's time to go to work at the country club."

I came over a few more times without ever meeting David Lee.  He was always out-cold or absent.  The first time I remember seeing him awake he was just about to leave for work, trying to scrape up enough weed fragments for one more hit before he went out the door. 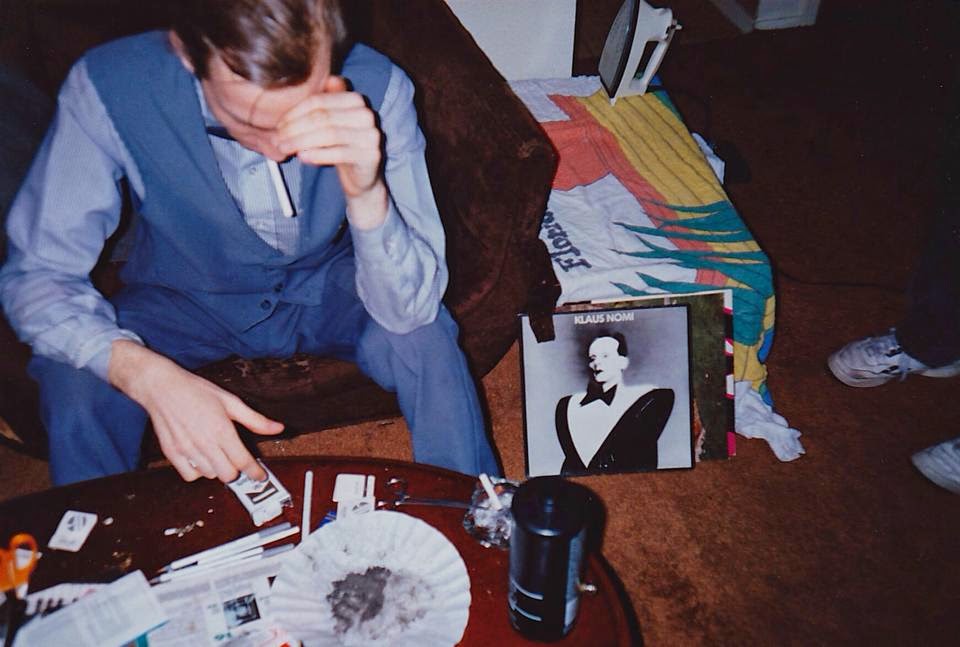 Todd was a social guy, liked being out at night, drinking in night clubs and just hanging out, the same as me.  We'd been out one night drinking too much, and I dropped Todd back by his apartment. David Lee had been working on a sequence while Todd was away, a song later titled BulletProof.  I thought it was good and for the first time realized that the roommate had real talent.

Here some of the early SPY recordings from 1988 here:

Posted by devinvenable at 8:31 PM

Not sure! Maybe that was the same night I met you both at the lake. It's the only time I really remember being at the muddy lake. Do you remember what it was called?